How a Christian Should Vote: Kingdom Clarity (Part 1) 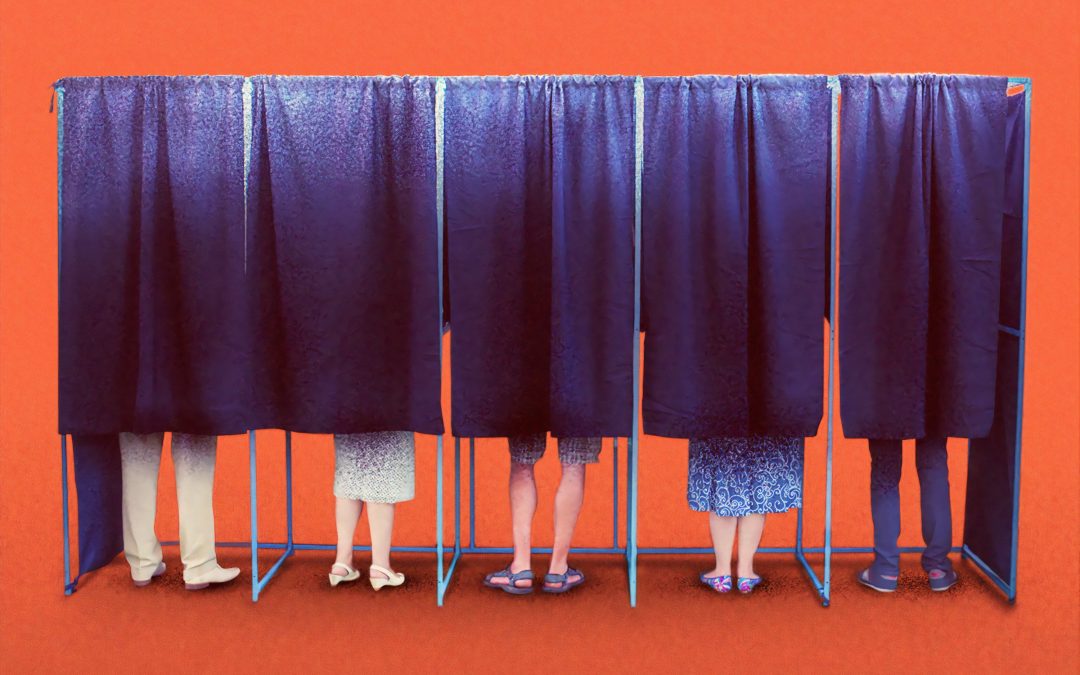 How should a Christian vote?  This should be a difficult question.  This question should cause tension, even anxiety.  Discerning how to use the influence afforded us in a democratic republic should raise serious questions about our ethics, values, convictions, and rights.  There are multiple Christian organizations that will try to make the decision easier for you by distributing “non-partisan” voter information cards.  There are pastors and Christian writers who will make passionate arguments for their candidate or party of choice.  I am not going to do that.  I believe it is my role as a preacher and professor to equip Christians to make difficult decisions.  It is not my role to make the decisions easy.  What we need is not a simplified rubric for the right way to vote.  What we need is an understanding of how our citizenship in the Kingdom of God informs our citizenship in this country.

In the coming weeks I will be examining this question.  How should a Christian vote?  I will not tell you which candidate or party to vote for.  I will not present a chart for you to calculate which candidate checks the most “Christian” boxes.  I will not make your decision easier.  I will equip you to make the decision faithfully, with a better understanding of the relationship between Kingdom and Country.

There are three complex, highly nuanced steps to how a Christian should vote.

Step 1: Understand the Kingdom of God.

Step 2: Determine how the Kingdom of God should influence the country.

I hope you will join me in this complicated and Christ-centered process of discernment as we prepare for the upcoming election.

Step 1: Understand the Kingdom of God

The apostle Paul wrote, “Our citizenship is in heaven.  We eagerly await a savior from there, the Lord Jesus Christ” (Philippians 3:20).  What does it mean to be a citizen of heaven?  When we profess Jesus Christ as Lord, we affirm that he is the only authority to which we owe ultimate obedience and worship.  All other allegiances and loyalties are subordinated and relativized.  Some Christians define allegiance to Christ primarily in terms of specific actions we individually engage in or refrain from.  But being a citizen of heaven isn’t simply a set of behaviors; it is an identity.  And what that identity means for us here and now is determined by what that identity means eschatologically.  Eschatology refers to the end of time, when Jesus Christ returns and the Kingdom of God is fully realized and established.  The Kingdom of God is the goal, the ultimate reality, the hope and promise toward which we are living.  Unfortunately, for many Christians there is a gaping void where robust eschatology should be, and that void is often filled by an incoherent combination of fiction (Late, Great Planet Earth; Left Behind) and political party platforms.

Before we can engage in electoral politics faithfully, we must clarify our vision of the Kingdom of God.  The goal, or telos if you want to get Greeky about it, informs how we journey toward the Kingdom.  When we pray as Jesus taught us, “Your Kingdom come, your will be done, on earth as it is in heaven” what does that actually entail?  For that answer we look first to Christ, whose life, death, and resurrection inaugurated the Kingdom of God.  Then we fill in more of the details with the whole counsel of Scripture.  When we have a clear vision of the Kingdom of God, we can then ask ourselves whether our actions and dispositions are consistent with God’s Kingdom and what that means for our political engagement.

Jesus began many of his parables with these words.  While Jesus’ parables have an element of mystery and often elicit confusion from both his disciples and contemporary readers, the core truths they communicate are not very complicated at all.  They only seem complicated, because they are so deeply at odds with the values of any temporal country.  In the parables we learn of God’s mercy on the undeserving (Luke 15:11-32), God’s judgment on the unrepentant (Matthew 25:31-46), God’s sacrificial love for the lost (Luke 15:4-10).  They tell us that the Kingdom of God will come all of a sudden, so we should be prepared at all times (Matthew 25:1-13).  They tell us that the Kingdom of God is worth giving up everything to pursue (Matthew 13:44).  The parables do not teach us about Jesus’ preferred economic system or political party.  They tell us what the Kingdom of God is like, which also reveals the insufficiency of all human economic and political systems.

If the parables aren’t clear enough, we also have the life of Jesus himself, which bears witness to the nature of the Kingdom of which he is Lord.  Jesus forgives the sinful (Luke 7:48), heals the sick (Matthew 8:16), feeds the hungry (Matthew 14:13-21), and in so doing gives us a glimpse of the coming Kingdom in which there will be no sin, sickness, or hunger.  He gives very straightforward instructions about how we should live in the world while sin and sickness and hunger remain: forgive those who sin against us, visit and pray for the sick, feed the hungry (Matthew 5-7).  When Jesus tells us to seek the Kingdom of God first (Matthew 6:33), he rules out setting our sights on power, wealth, prestige, beauty, or any other temporal goal.  In his death we see that the true nature of power is not domination by force, but rather victory through sacrifice, and then we are told to have the same humility as Christ did (Philippians 2:1-13).

When we expand our study of the Kingdom of God to the entirety of Scripture we find that the nature of the Kingdom can be summarized in two words: Agape and Shalom.  Agape is one of the Greek words for love, often described as the type of love the God shows for humanity.  It is the love that Christ calls to have for God and neighbor (Mark 12:33).  It is the love by which Christ lays down his life (John 15:13).  It is the love that is the greatest of these (1 Corinthians 13:13).  And lest we try to deceive ourselves about the nature of love, 1 Corinthians 13 explains in great detail what agape does and does not do.  When we seek the Kingdom, we seek agape.  When we are discerning what Christ would have us do or not do, we ask whether our action or inaction leads closer to or farther from agape.

Shalom is the Hebrew word often translated “peace,” but shalom holds a great deal more meaning.  It is wholeness, just right-ness, perfection.  It is the state of things exactly as God would have them be.  It includes justice, safety, health, provision, abundance.  The prophets speak of shalom when they cast a vision of the wolf dwelling with the lamb and a little child leading them (Isaiah 11:6).  Jeremiah instructs the exiled Israelites to seek the shalom of the city in which they are in exile, because in its shalom they will find their shalom (Jeremiah 29:7).   When we seek the Kingdom, we seek shalom.  We ask the Holy Spirit to search our hearts and reveal to us the ways we contribute to brokenness, harm, fear, illness, scarcity, and pain, then commit to move toward shalom instead.  When we are discerning what Christ would have us do or not do, we ask whether our action or inaction leads closer to or farther from shalom.

Once we have a clear vision of the Kingdom of God we can disentangle the fictions and politics that have filled the eschatological void.  This description is only a starting point for your own prayerful study of Scripture and examination of your own actions and attitudes.  I’ve included some additional biblical references below, but really the best approach is to read the entire Bible (yes, the entire Bible, Genesis to Revelation) with the questions “what is the Kingdom of God and what does it mean to be a citizen of heaven” at the forefront of your mind.

How, Then, Shall We Vote

What does all this have to do with voting?  Everything.  First, a clear vision of the Kingdom of God relativizes all American politics.  By that I mean that we should recognize that the United States is not, never was, and cannot ever become the Kingdom of God.  America is not ultimate or eternal.  American prosperity is not our telos.  If we attach ultimate value to partisan politics, for example by using messianic language about candidates or placing utopian or apocalyptic weight on their agendas, then we lose sight of the Kingdom of God and fail to seek it first.  In this sense, the way we vote has no bearing on the Kingdom of God.

Third, a clear vision of the Kingdom of God shows us that no political party in the United States, or anywhere else for that matter, has a platform that is totally aligned with the values and ethics of the Kingdom of God.  We shouldn’t expect them to, since the Kingdom of God is eternal and the United States is not.  When Christians frame the choice of political party as a choice between Christian and non-Christian, we have replaced Kingdom allegiance with party allegiance, and have very likely supplanted some Kingdom commitments with planks in our preferred party’s platform.

Fourth, a clear vision of the Kingdom of God shows us that American values and commitments are not identical with Kingdom values and commitments.  American values are primarily oriented around individual autonomy; Kingdom values are primarily oriented around love for others.  America sees sacrifice and mercy as exceptional, even heroic, and sometimes incomprehensible or suspicious; in the Kingdom of God sacrifice and mercy are normative.  America defines people’s value according to their talent or productivity; the Kingdom of God defines people as bearers of God’s image for whom Jesus Christ lived and died and rose again.  These conflicting values should always create tension between our Kingdom and country citizenships.

The question becomes, then, in what way and to what degree should American politics be informed by a Christian vision for the Kingdom of God?  Do Kingdom values only inform individual and church actions and attitudes, or should they influence public policy as well?  Is the government of the United States supposed to make the country more like the Kingdom of God, or does government have a different goal?  What Kingdom commitments, if any, should be included in a legislative agenda?  In short, what is the relationship between Kingdom and Country supposed to be?  Answering this question is Step 2 in determining how a Christian should vote.

Over the next several weeks I will explore different ways to answer these questions.