The United States is Not the Israelites; Washington is Not Jericho 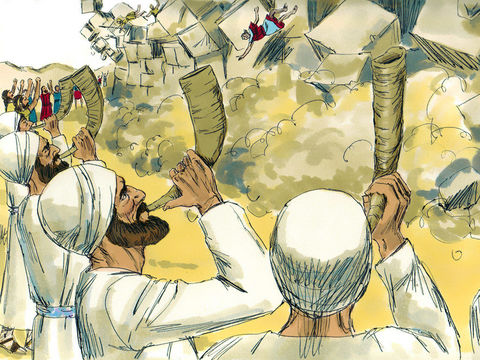 I recently wrote about the theological and political dangers of Biblicism.  That danger was on display as the Christian Nationalist group Jericho March gathered in Washington, D.C.  on December 12th 2020, to demonstrate for “election integrity, transparency, and reform.”  This group plans to rally again today, January 6th 2021, as Congress convenes to certify the electors.  Jericho March bills itself as “Judeo-Christians collectively praying to God to intercede, expose a particular darkness, and bring about justice.”  There’s nothing inherently problematic about these goals.  Indeed, Christians are instructed to pray for our leaders and to pursue justice, and we should take full advantage of the constitutional liberties that allow us to demonstrate, protest, and voice our convictions in the public square.  However, the rhetoric and goals of Jericho March are marked by Christian Nationalism fueled by a misguided biblicist view of Scripture.  Below I outline several of the theological and biblical problems with Christian Nationalism and its manifestation in Jericho March.

The United States is Not the Israelites

Second, God calls people, not countries.  Throughout Scripture, God’s address is personal, as in God speaks to persons.  Often the personal is collective or communal, as in the Israelites, the Ninevites, the Babylonians, or the Body of Christ.  People turn to God, individually or as groups but always as human beings.  When the Bible speaks of “nations” (goi/goiim in Hebrew, ethnoi in Greek) it is referring to groups of people related by birth (nation, from natus, meaning birth) or by faith, not to nation-states or countries, which are inventions of modernity.  In other words, when Scripture refers to a “nation,” it is not referring to the United States or any other country.  Christian Nationalists, on the other hand, direct their call to the United States as a country and to the government as an institution, not to people.  The goal of Christian Nationalism is not for American people, individually or collectively, to worship God or to profess faith in Jesus Christ.  The goal is for America as a country to enact laws and systems that correspond with select parts of the Old Testament — not the parts about forgiving all debts in the Jubilee or welcoming foreigners or providing for the poor or not lending at interest, only the parts about . . . well, I’m not sure what’s left other than sexual ethics.

Third, the idea that the United States is the Israelites is a form of replacement theology with deep roots in anti-Semitism.  This line of thinking says that the United States has replaced the Jews as God’s chosen people, which is an extension of the belief that Christians have replaced Jews as God’s chosen people.  Christians replaced Jews, America is a uniquely Christian nation, therefore the United States has replaced the Jews.  Replacement theology and the relationship between Christianity and Judaism and modern Israel is quite contentious and is not my area of expertise, so I will not attempt to examine it in depth here.  Suffice it to say that equating the United States with the Israelites removes the Jewish people from the picture, notwithstanding Christian Nationalism’s allusions to “Judeo-Christian heritage.”

Washington, D.C. is Not Jericho

Many of the points above also apply to equating Washington, D.C. and the United States government with Jericho.  “Jericho” is an allusion to Joshua 6.  Joshua led the Israelites into the Promised Land, fulfilling the mission that Moses described and that John Winthrop cited.  In order to enter the Promised Land, Joshua led the Israelites to conquer Jericho.  God commanded Joshua and his army to march around Jericho for six days, then on the seventh day the priests blew trumpets while the troops shouted and the walls of Jericho collapsed, allowing the Israelites to conquer the city and destroy everything in it, executing God’s judgment and receiving God’s promise all at once.  Jericho March makes an explicit connection between Jericho and the United States government: “Just as Joshua was instructed to march around the walls of Jericho, Jericho Marchers march around at a specific place and time until that darkness is exposed and the walls of corruption fall down.”  The connection isn’t unique, though.  Christian Nationalists regularly correlate the government or some faction therein with the various enemies of the Israelites.  This is problematic for several reasons, in addition to those outlined above.

First, Jericho analogies welcome violence.  Any way you read it, the Jericho narrative is violent.  Maybe that violence is justified because it is commanded by God (this is a disputed point among biblical scholars, theologians, and Christian ethicists), but that doesn’t make it any less disturbing.  To draw analogies with Jericho or other enemies of the Hebrew people runs a very serious risk of inciting or justifying violence.  Bad hermeneutics can get people killed.  That is not an exaggeration.

Second, religion differentiated Jericho from the Israelites, but there are many, many Christians in the United States government whose faith profession is born out in their daily lives.  88% of the 117th congress self-identifies as Christian, which is over 20 percentage points higher than the general population.  You can read that data, including the breakdown by party affiliation here.  The United States government is not the enemy of the People of God, neither is it necessarily their ally.  If Jericho is an analogy for legislation and not people, then we should note that the majority of religious liberty cases that come before the Supreme Court are decided in favor of religious groups.  Of course not all laws align with the preferences of any subset of Christians, but that’s the nature of a secular pluralist government.  Religious liberty requires vigilance and the moral character of the country requires attention, but Jericho is not a helpful analogy for the relationship between the government and the Christian faith.

The people who govern and the government itself are not Jericho.  To make such an analogy is dangerous and misguided.

Jericho March and similar movements warrant response because they exploit the inspired and authoritative word of God for political ends.  It matters because some Christians see the Scripture quotations and biblical analogies and accept these movements as meritorious expressions the Christian faith and laudable protectors of Christian values.  But Christian Nationalism does not seek to advance the Christian faith, it seeks to advance and protect its own political power.  It is not a Christian movement.  If it were, its goal would be missional, not political.  Christian Nationalism is indifferent to the Gospel of Jesus Christ and has no interest in the love of God and neighbor.  Its uses Scripture to incite fear and provoke anger.  Christians must discern the Holy Spirit in the rhetoric to which they listen and ask whether that rhetoric draws bears witness to the love of God in Christ Jesus and draws Christians to grow in the fruit of the Spirit.  I submit to you that the political rhetoric of Jericho March and other Christian Nationalist movements fails this test.  You can watch the speeches from the December 12th event to decide whether you agree.